I am not an authority on “Ghostbusters.”  I do not own my own proton pack, have not engineered my own Ecto-1, and I’ve never drank an Ecto Cooler.  But people that know me have expressed interest in my thoughts on the new movie.

I do have a lot of paraphernalia from the first film.  Those are mainly gifts from people that know that the original 1984 film is tied for the top spot of movies in my heart (with “It’s a Wonderful Life” and “American Movie”).  And since I am such a movie enthusiast and because my passion for storytelling is boundless, that top spot means I can tell you details about the film to the tiniest minutia.

If it’s Ghostbusters related, I know about it, and I have something to say. 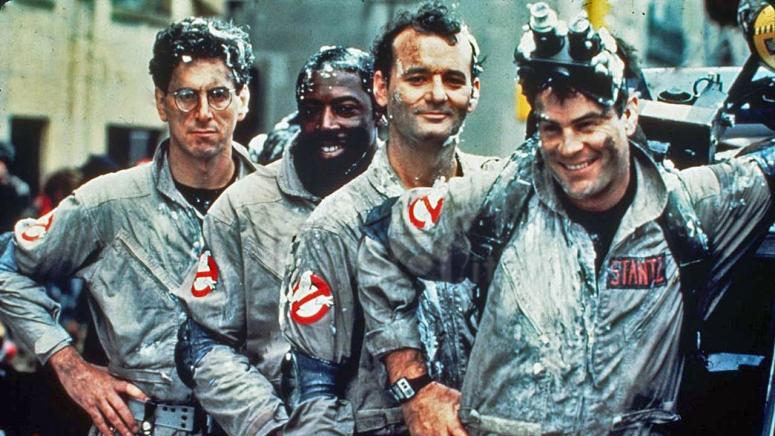 So let me start off with a story about a ten year old kid.  I was excited so excited to be going to see my heroes on the big screen for the first time.  I had watched Bill Murray, Dan Aykroyd, Harold Ramis, and Ernie Hudson on VHS and TV showings for years.  I had watched every episode of The Real Ghostbusters on Saturday mornings.  Despite being poor, I even had a couple of the action figures (the kind that animatedly freaked out when you pushed down an arm or squeezed their legs together).  Bill Murray was then and still is one of my favorite actors (one of my personal goals is to write a role for him that would win him an Oscar).  I didn’t know it then, but the original film would easily qualify as the film I would see more times in the theater than any other (usually on my birthday).  So when I watched “Ghostbusters 2” unspool on the big screen, I was about as excited as a kid could be.

But I’ll tell you something, that movie is terrible.  It uses convenient job changes that make no sense (Dana goes from world class musician to world class art historian, Luis Tully goes from passionate accountant to lackluster lawyer, all in five years?).  They completely change characters, forgetting what made Egon funny and have him hamming it up for the camera and having Janine go from mousey Queens nerd to flamboyant Queens hipster.  The logo was changed to show it was a sequel with no world-building reason for doing so.  And most importantly, it wasn’t funny.  There are a handful of funny lines in the movie, but overall, the first film was a much-improvised masterpiece, lightning in a bottle, and the second movie fell flat.  I was a child, and they were pandering to me, and I knew I was being pandered to and felt betrayed.

For years they talked about a third movie, and for years I was in Bill Murray’s camp.  “We made a good one.  We made a bad one.  Why make anther one?”  And when Bill callously said he was concerned that “some of the people involved” had lost their taste, siting Harold Ramis’s “Year One,” I cringed for their unresolved personal relationship but was right there with him.

So here comes the inevitable reboot.  I knew it was going to happen and had been bracing myself for it.  I even wrote this blog, which is a part of my “Re-Imagining” series that I sometimes do, the premise being “They’re going to remake it, so how could they do it where it could ever possibly satisfy me.”  Knowing the rumors that they were thinking of making a female version (and this was a couple of years ago), I had even included casting choices for that.  The only actor I could think of that could come close to Murray was Melissa McCarthy, so when she was cast, I was optimistic.  Really, the whole cast had me excited.  I’m a huge fan of Kristen Wiig, and I love what Kate McKinnon and Leslie Jones are doing on Saturday Night Live.  These are great choices.

I watched Paul Fieg’s “Spy,” “Bridesmaids,” and “The Heat” to get a feel for his work.  The first two were great, and the last one was at least funny.  So I was optimistic about his inclusion too.

Then the trailer came out, and it was bad.  The most hated movie trailer in internet history.  It looked lame, unasked for, and worst of all, unfunny.  People were done being tricked into watching terrible movies based on beloved franchises. . .  Sick of Michael Bay’s adaptations. . .  Tired of tone deaf recitations of The Lone Ranger’s theme. . .  Fed up with darker, overly-shadowy versions of beloved icons, this would be the battleground on which they would make their stand and say, “No More!”

In response, the filmmakers called us all misogynists, and some of us undoubtedly were, but not all.

Which brings me to last night, when I sat in a theater with 3D glasses.  It was the theater directly across from my old store, where I had staged a legendary release party for the video game that had come out seven years earlier.  A party that had authentic costumes and equipment, games and themed snacks, and a real-world, internationally acclaimed psychic who claimed to have talked to someone’s dead mother right there that night.  And there I sat with both high and low expectations.

What a relief when the movie was actually pretty good.

There are a few times when the movie makes choices that don’t make sense (Chris Hemsworth standing in the street, saying “I’m a part of the team” comes out of nowhere).  There are a few too many one-liner references to the source material.  And lines that should have been improvised away (“That’ll leave a mark” being the sorest thumb).  But it worked.  Aside from the cameos, which were well-paced and fun, the film hummed best when it stood on its own merits.  There are scenes that lay flat here, and then there are laugh out loud lines and moments that far outweigh those.  The middle of the movie is where it would have benefited from re-writes and skilled improvisation, and the end feels heavily edited.

Here’s where I might take some crap.  While the first film is a better comedy, this one is a better ghost story.  The ghosts in this movie are beautiful and scary.  The explanation for the extra psychic-kinetic energy in the city is a fun new take.  And while the story of Zuul lingers in the background of a character-driven 80s comedy and only becomes the central figure in the third reel, this new movie’s grounded in that story from the first scene.

A lot of the stuff that bothered me in the trailer were fine in the film.  This is particularly true for Kate McKinnon’s character, which only makes sense when you spend some time with her.  Kate and Leslie Jones are the comic force of this movie, and they both steal scenes, blowing a hole through the television screen to step onto the big screen in a big way.  Still, Melissa McCarthy and Kristen Wiig are the heart of the film, and they keep us grounded in the real world while so many strange things are happening around them.  The movie is about friendship and about how finding someone that gets you can save you from torment and ridicule (or at least from caring about that stuff as much), and after an hour and forty seven minutes with these characters, I wanted to see more of their story.

The film also lets the supporting cast shine in their own right.  Every actor that speaks, from Zach Woods to Karan Soni, Nate Corddry to Steve Higgins, Ed Begley Jr. to Andy Garcia, Cecily Strong to Chris Hemsworth, turns in a strong performance here.  And this honestly shouldn’t surprise you if you’re familiar with Paul Fieg’s work.

The busting also made me feel good.  No, really.  The whole way they fought ghosts was fresh, unique, and emotionally satisfying.

It’s not a perfect 10.  It’s more of a 7.5.  But in the end, when it comes to material based on the “Ghostbusters” franchise, it stands above most of the rest.  It’s on par with the video game and the best episodes of the cartoon and comic books, and that’s a hell of an accomplishment.

We also learned something about how Hollywood works, didn’t we?  When the studio puts out a trailer the fans don’t like, you can either blame the studio or the fans.  I think by focusing on the most vocal bigots in the fan community, the filmmakers were able to get the studio to back them and get the fans that weren’t rabid woman-haters to give the movie a chance.  It sure got ugly and made a lot of people defend themselves for simply worrying about what they were seeing, and it put the cast and director on the defensive.  That’s not the kind of atmosphere you want a big, nerdy love fest to come out in.

Finally, while I hate to tell people their opinions are incorrect, if someone tells you that “Ghostbusters 2” is a classic and this is trash, they’re dead wrong.

I don’t really purchase movies anymore.  I have over three hundred DVDs and never load them, instead streaming Netflix, Hulu, and Amazon Prime or watching Direct TV.  But since I’d really like to see a sequel in this new franchise, I ordered the Bluray for “Ghostbusters: Answer the Call,” which includes the extended cut.  Upon my second viewing, I have a few more things to say.

First of all, I’d like to acknowledge that the first hour of the film is pretty solid.  It’s the middle portion where most of the cuts could be made (some of which were), and if I had the job of doing the theatrical edits, I would have seriously considered leaving out anything that didn’t actively move the story forward.  That would unfortunately include Bill Murray’s scenes.   I think you could have left more of the middle on the editing room floor and left in more of the end.  As stated in my review, the end felt choppy and there were some things that didn’t make sense because of the edits that were made.

That being said, I actually prefer the extended cut.  In fact, some of the scenes that remained in the deleted scenes could have been put back in as well.  Overall, it wouldn’t improve on the score I gave the movie.  It would still be about a seven, but it is more of a comprehensive narrative.  Since I enjoyed what I saw, I don’t mind having more, even if the movie doesn’t kill me like it did during that first hour.

The day I got my Bluray, I woke up from a dream about the sequel that will probably never be.  I was thrilled that it was coming out, and I imagined that they would grow the material in more meaningful, emotionally grounded ways the second time around.  Let’s hope these girls get a second chance to answer the call.

2 thoughts on “Ghostbusters (2016): A Superfan’s Perspective”