Follow me as I watch 50+ of the best (and worst) holiday films! I will blog mini-reviews as I go and then rank them when I’m done watching them all.

What would you be willing to trade for just one more day with a loved one who has passed away? This story is about a boy who has lost his father, and the emotional reality of that is well grounded in this story. This is a kids movie that isn’t afraid to delve into the subject matter.

However, in this film, a boy spends Christmas with a snow man that’s been inhabited by the consciousness of his dead father, and despite the slapstick and pun possibilities inherent in that premise, a snowman is not a very warm thing. Simply put, you can’t hug a snowman.

Overlaying a story of loss over the Frosty the Snowman tale works better on paper, and since Michael Keaton is a much more animated and likable figure than the animated snowman he voices throughout most of the movie, his loss is felt by the audience in a way that makes the movie less compelling to watch.

He’s also the least absentee deadbeat dad in movies about dad’s that have to make up “missing the big game” probably in cinematic history. This is a great dad that just has a job that isn’t super flexible. So maybe the lesson here is that having dad around *all* the time sucks when he’s made of ice and snow?

Surprisingly, even with a wide scope of watching over 50 Christmas movies, this was the only one that was religious in nature. This is simply not a part of the tradition that is done often or well enough.

This version is told faithfully and doesn’t suffer from the “bad hair and bad music” that Mel Gibson cheekily suggested most religious movies are guilty of. But it plays the story safe, trying to be commercially available to all denominations of Christian faith – and open-minded people who don’t worship at the cross. This leaves the drama a bit stale and the story a bit passionless.

There are some excellent aspects of this story. The actor that plays Joseph (Oscar Isaac) does an excellent job, and I’m guessing I’m not the only one to think that. He’ll be in Star Wars VII and X-Men: Apocalypse.

Overall it’s not perfect, but this is a decent film to watch while setting up your Nativity set.

This is a much more Muppety movie than the Christmas Carol. All of the pandemonium that you’ve come to expect and love from the titular puppets and their star cameos is fully represented here.

If you’re a fan of Kermit the Frog and the gang, this should be on your holiday wish list this year.

It’s oft been said that suicide rates increase during the holidays, and this comedy centers around Lifesavers, a suicide prevention hotline.

The flailing business is on the Venice Beach boardwalk, which is one of the strangest places in America, populated by colorful characters. In thisNora Ephron film, our group of mixed nuts is played by a stellar cast led by Steve Martin. We get glimpses of Jon Stewart and Parker Posey; classic Adam Sandler; the power of Madeline Kahn; an ensemble that includes Rita Wilson, Robert Klein, Rob Reiner, Anthony LaPaglia, Julliette Lewis, and Garry Shandling; and Liev Schreiber in a dress!

It’s a remake of Le père Noël est une ordure (Santa Claus is a bastard), which is a cult French play. While Ephron chose to change many of the details of the plot and characters, the feeling of a door-slamming, slapstick heavy French comedy is left intact, and that’s a good thing! (Think “The Birdcage.” Totally American and yet also Franco-Italian in tone.)

If you want to leave your own crazy family and escape into a group of much funnier and more pleasant crazies this Christmas, simply open up a can of Mixed Nuts. 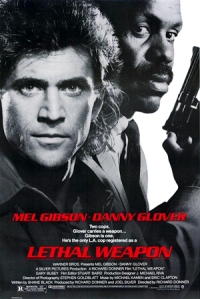 Riggs is a lost soldier that hasn’t decided whether he’s ready to die. He has no one.

Murtough is surrounded by a chaotic family he feels he’s lost complete control of. He can’t even take a bath in peace, and his wife can’t cook.

When the two of them find one another, we learn the true meaning of Christmas: cops killing bad guys.

Of all the action series, Lethal Weapon is my favorite. The two leads are both very different kids of actors that both ignite the screen in very different ways. Mel Gibson (Riggs) plays out all of his emotions in his eyes and is large, animated, and rugged. Danny Glover (Murtough) always keeps his real thoughts hidden behind a mask of a more subtle registration. He whispers his lines. He draws you close.

This is the first of four films, and it is the best. Richard Donner changes the tone throughout the series, first making it more serious (2) and then more comic (3 and 4), but this is the perfect mix of both. You go along on a ride along with these two detectives as they first frighten one another and then turn into the primordial buddy cops from which all others have sprung.